The smile of a martyr 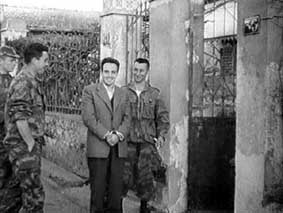 This photo of the freedom fighter and martyr Larbi Benmhidi has always fascinated me. How a 34 years old man arrested and handcuffed, can be that calm showing a proud and peaceful smile in front of his enemies?

What was the secret of this radiant serenity…of this aura glowing from within?

Some time ago, an old relative saw me reading Trodi’s book on Benmhidi‘s life. He looked at the photo on the book’s cover , sighed and said: “Si Larbi, may Allah have mercy of him, was a special kind of man.

Surprised to discover that he knew him, I asked him why he said that. He told me that he still remember his words when they both were boy scouts.

The old man smiled with tears in his eyes as he remembered his martyred friend. الله يرحمه

I was so happy to hear those words as I finally found the secret of his smile. That man was born free…He has always been free…Well before the independence of Aljazair.

Indeed, Si Larbi, France has left Algeria with its colons and army

….and a whole nation remembers you

May you rest in peace in Jenna for eternity.

One thought on “The smile of a martyr”