Remember, remember the fifth of October! 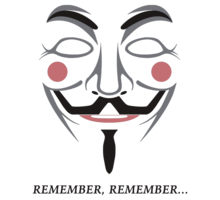 Remember remember the fifth of October …the Algerian proto-arabspring plot…I know of no reason why the October treason …should ever be forgot!

We are living strange times in Algeria these days…where tables are turned…and hopes are rising from the ashes and dusts of the past.

And amid these changing events, calls for people to rise are getting louder in Algeria. Ironically, those suspicious calls come from old has-been of the 1990s : retired militaries, politicians and journalists. And we, the people, who still bear the scars of their past crimes, we are supposed to believe them, we are supposed to follow them. Do they think that we have forgotten the years of terror, all the pain, all the fear? Do they think we have forgotten the role they played in our past tragedy?

I don’t belong to the young generation with a clean memory slate vulnerable to social media’s disinformation campaigns. I belong to the old generation whose youth’s memories still recall the bloody change of the fifth of October 1988. I still remember that change and the price it cost: hundreds of innocent young Algerians, killed, shot dead by their army. The promised change was a fake democracy that led the country into the 1990s shameful, dirty war of terror. But then, the price was much higher: 200 000 deads and a whole society broken, shocked and traumatised … We learned the hard way that people cannot change regimes. They are only used by the powerful rulers to achieve their plans.

Rulers call for people when they reach a status quo and need “useful idiots” to tilt the balance and trigger the change they need. They call for people, not as a society, not as citizens, but rather as a stupid anonymous crowd to be easily manipulated by fear and anger. Lead it to revolt. Let it scream and shout, to be killed and crushed. They need blood. They need chaos to create the needed tension that goes crescendo until it causes the fall of the weakest player. Then, the winner takes over power and calls the army to clean the mess, the bloody mess.

I wonder if there are people in Algeria who still remember the fifth of October… Who reckon it as …a fabricated “popular uprising” that cleared the way to our bloody proto-arab-spring. Certainly not the young generation, for whom the 5th of October riots is an old forgotten tale. But my generation, the wounded and shocked generation, has to recall our past to learn from the mistakes we made. May be it would prevent us and our children from falling in the same trap once again.

Abdelhamid Brahimi, who was the prime minister in 1988 wrote in his book “Hizb fransa, Aux origines de la tragédie nationale” that 1988 riots were far from being a spontaneous revolt. He suspects it to have being plotted by a powerful group of military officers and politicians close to the president Chadli in order to impose the political and economic reforms they planned (section 8.2 page 222).

It is worth reminding that after the 1988 riots, the promised change gave birth to a fierce liberalism with a greedy and corrupt oligarchy, horrendous terrorism, and skyrocketed the 1990s military junta on the top of power. The crowd of people who was led to the streets to call for change, for freedom and justice…gained none…Only more injustice, oppression…and terror.

Had we known back then, that the 5th of October revolt would yield this sad and lethal outcome, I doubt any young Algerian would have left home that day, but we didn’t know then. We thought people can change regimes. We were dreaming, and the wakening was hard, bloody hard for the people…

We learned the lesson well…very well…and the fifth of October’s treason…would never be forgot!

2 thoughts on “Remember, remember the fifth of October!”